SLGCC Manager Sheila Suprovich shared, “The event went really well. It was extensive planning and prepping as it’s a big tournament but it all came together in the end.” She added, “Many guys travel from out of town every year to participate so it was great to see them come back as well as the newcomers to the tournament.”

Another participant, Gene Duncan, who is a regular golfer, said that walking the course for several hours is not only a good way to stay healthy, but that it also serves as some refreshing time to think. He said, “It is very well organized, like every year, and Sheila and the rest of the crew are doing an excellent job. So, kudos to them.”

Golfers were divided into five flights based on handicaps for an even playing field, shared Suprovich.

The head greenskeeper for SLGCC and a participant in the Men’s Blueberry Open, Kyle Durante said that he enjoyed his day playing on the course that he had worked hard on to prepare for the tournament. “It’s been good, my scores don’t reflect it. But, it’s finally nice to just step away from work and get out here and enjoy it with a bunch of guys,” said Durante. “It’s been a long day. I was here at five, starting work, to prep the course for the day. But, we are out here now and trying to enjoy it, and hopefully get something going here on the next few holes,” he added.

Another golfer, Jim Kusick said that he always has a good time playing at the club’s course, with the two days of the blueberry tournament being beautiful days to play. He shared his relief recognizing the extremely low to nil COVID-19 cases that were reported at the time in the area of Sioux Lookout, allowing the club to conduct tournaments.

On-course snacks and refreshments were offered by Sioux Looks Out for Paws as a fundraiser to support the substantially increasing number of animals that they are currently caring for. “I approached Sioux Looks Out for Paws to see if they were interested in setting up a BBQ as a fundraiser. They kept 100 per cent of the profits. They sold hamburgers, hot dogs, chips and drinks both days (of the Men’s Blueberry Open Golf Tournament) and during the ladies tournament. They run a lot of their organization with volunteers so I wanted to offer them an opportunity to raise funds for the supplies they need,” shared Suprovich. 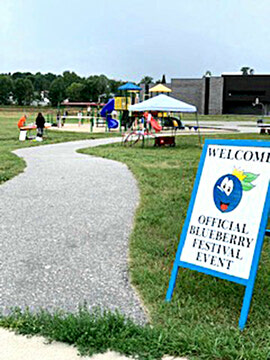