A short but successful Home, Craft and Trade Show

The Sioux Lookout Chamber of Commerce conducted this year’s Outdoor Home, Craft and Trade Show last Thursday, as part of the Blueberry Festival.

The Chamber’s Executive Assistant Kayleigh Bates shared, “While the weather was not ideal and forced us to shut down early, this year’s event went well. Everyone kept saying how nice it was to get out and chat with the exhibitors and other attendees. People are looking for connection these days and, while it was only a small event, this provided a time and space for them to do just that. I would like to thank our exhibitors for participating this year and offering this event to the community.”

The event consisted of eight exhibitors including Sioux Hudson Literacy Council, Eric Melillo MP, The Hub Roastery, and Sioux Lookout Meno Ya Win Health Centre Foundation, among others. The exhibitors who registered, but couldn’t attend, Bates thanked them for supporting this reimagined event and hopes to see them at next year’s Trade Show.

Boston Zaffino, an eight-year-old who was helping his mother at the Sunstone Lifestyle booth said that he liked helping his mother and was enthusiastic to stay there all day. Zaffino said, “I’m helping my mom sell her products.” He added, “She sells products that are earth friendly.”

Zaffino said, “I am kind of helping her and learning how to sell.” When asked what he learned about selling products, he said “you should ask someone if they want a bag to carry their stuff in.” The young spirit was excited to answer customer’s questions.

Bates shared, “In the past, the Sioux Lookout Chamber of Commerce’s Home, Craft & Trade Show has hosted 50 plus exhibitors inside and around the Sioux Lookout Memorial Arena. This highly anticipated event usually takes place over two days and is attended by hundreds of Sioux Lookout residents and visitors from all over the region.

“Due to regulations and restrictions we were unable to plan for an indoor show this year. Instead we decided to run it outside, here at the Travel Information Centre, similar to our farmers markets. There were screening posters at each entrance and event capacity was limited to 100 people (this includes exhibitors, staff, and attendees). There were 10 exhibitors pre-registered and a total of eight attended the event. Some of our registered exhibitors could not make it due to the forecasted weather conditions.”

Sioux Hudson Literacy Council’s Literacy Instructor Anita Webster said that their aim to attend the Trade Show was to inform as many people as possible about their services. She said, “This is our 30th year anniversary of being in existence, and certainly we always want to be supportive of the Trade Show, we love coming to the Trade Show. We definitely want people to know who we are, what we do, how we can help them.”

Webster said that they aim to motivate anyone who would like to grow their knowledge about gadgets such as a 3D printer, laser etcher, among others, could reach out to them at 737-8022, to learn more about it. Webster said that they also provide learning programs and support services to help adults in Sioux Lookout take their next steps in life. They help adults get their high school diplomas, along with assisting them with office skills, job skills and life skills. “Just any assistance that people need, we want to be there to help,” said Webster.

Bates shared that given the COVID restrictions at the time, with the event’s regular venue being closed, and with the safety and well being of the community being their top priority, the Chamber was unable to host the Trade Show last year. With COVID restrictions gradually loosening, she added that they were safely able to run the event outdoors this year, in limited capacity and at a much smaller scale.

Bates looks forward to returning to a typical in-person event next year. Bates shared, “We are hoping to be back with our regular Trade Show programming next year! It will be great to host a larger event with more exhibitors and back at a central location. There’s no better year to bring it back either, as the Sioux Lookout Blueberry Festival will be celebrating its 40th year!” She added, “You can stay tuned for updates on next year’s event by liking the Sioux Lookout Chamber of Commerce Facebook page or by emailing the Chamber at [email protected]. 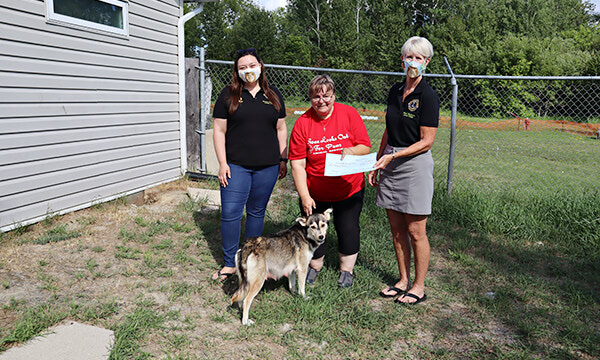 Sioux Looks Out for Paws receives donation to support operations

Sioux Lookout s animal rescue, Sioux Looks Out For Paws recently received a $1000 donation from the Sioux Lookout Lion s Club for all their hard work to care for the animals and pets of this community...