A chance encounter with the Northern Shrike

A chance encounter brought one of our areas more interesting winter visitors to the attention of local birdwatchers and nature lovers alike.

When JoAnn Ford sat down to call a friend out in BC, she had no idea the drama that was about to unfold outside her living room window.

As Ford explained, “I was sitting on the living room couch talking to my long-distance girlfriend in BC and all of a sudden I heard a big bang right behind me. I looked over the edge of the couch, and there was a little Downy Woodpecker (on the ground) with another bird on top of it!” At first, not quite sure what they were seeing, Ford related, “My husband thought it was an immature Whiskeyjack (Canada Jay). I ran out on the deck and chased the other bird off and thought ‘What’s going on?’. The bird had landed and was watching us, sitting up in the tree”.

As it turns out, the feathered attacker was none other than a Northern Shrike, a striking looking bird about the size of a Canada Jay, with a bold black mask and black wings on a light gray body.

The Cornell Lab of Ornithology site ‘All About Birds’ describes the Northern Shrike as being unique among songbirds due to “their lifestyle of hunting and eating animals.” The description goes on to explain that, “they often kill more prey than they need at one time, but they don’t let it go to waste. They often store food for later by impaling their prey on spines, thorns, or barbed wire, earning them the nickname ‘butcher birds’.”, while the Government of Canada’s Status of Birds in Canada website (https://bit.ly/3cxw4a6) states “The widespread but sparse population of Northern Shrike is distributed throughout Canada’s taiga and tundra habitats. Most birds migrate to southern Canada and the United States for the winter, but some birds stay year-round on their breeding grounds.”

Locally the Northern Shrike primarily seems most likely to be seen through the winter and early spring, when they move south of their northern breeding grounds. In the Sioux Lookout area, they have sometimes been seen around the area of the Municipal Airport, and also along the open fields of Highway 642, although they could turn up almost anywhere.

(Authors note: As an avid photographer of local wildlife, I have personally found my best sightings of Shrikes have happened around the areas listed above).

As Ford related, they quickly realized they were too late to save the Downy Woodpecker, which had probably broken its neck striking the window. Ford said, “We brought it in, and my husband got it in his hand, and he said, ‘No hun, I think the neck is broken…’. We think the Shrike drove it into the window. It happened so quick and then down it went. We put (the woodpecker) back out on the deck.”

Ford posted an image of the incident to the Sioux Lookout Birdwatchers group on Facebook and the attacker was quickly identified as a Northern Shrike.  Ford then looked it up in a bird identification guide, stating, “Once we identified it (through Facebook), we looked it up in the book and sure enough it was a Shrike. It hung around for a while, in the bushes. You could see it was looking around for (it’s meal).”

As for the Downy Woodpecker the Shrike had chased down?  “A while later it was gone. We don’t know what happened to it, whether an animal took it, or the Shrike came back and took it. We’re not sure.”

Ford isn’t the only area resident to have run-ins with Shrikes over the winter months.

When reached for comment on the prevalence of Shrike sightings locally, Edith Burkholder, a moderator of the local Facebook group Sioux Lookout Birdwatchers had this to say. “I haven’t seen them in Sioux Lookout except for the one last year, which Deb (Carter) had notified me about.” Burkholder continued “We went to the field along 642 just out of town and were watching for the Shrike because Michael (Lawrence) and Deb (Carter) had seen one in that area. Merle (Burkholder) saw it flying and noticed the striking white and black pattern on its wings. We saw where it landed briefly, then it flew to another area. It seemed to be hunting, and would fly low over the open area then swoop up to land on a tree branch We watched it for several minutes.”

Deb Carter is an avid local birdwatcher who has been involved in the hobby since 2007 and has been tracking her bird sightings since 2015. As she recalls, her first experience with the Northern Shrike happened back in February of 2017, and went something like this, “I was siting at the computer which was at that time set up in front of the living room window.  I could hear the birds at our feeding stations outside even with the windows closed up for winter, but suddenly things got very quiet.” As Carter explained, occasional lapses in feeder activity were common, but on this occasion something felt different. “The birds will often get spooked for a few seconds and get quiet, or move into the trees, but they usually come right back to feed again. But this time it seemed different.”  As she glanced up to see what was happening outside, she saw a small bird race past her window with a larger, pale gray bird in close pursuit. Carter continued, “I got up to get a better look and there it was, a (Northern) Shrike, sitting right on our shepherd’s crook feeder stand.”

Apparently, on this occasion, it had missed its target.

Since that initial encounter Carter has recorded 15 sightings locally, most occurring between the moths of November and April.

Despite the opportunity to watch one of nature’s most unique predators in action, Ford isn’t exactly hoping the Northern Shrike makes another appearance in her yard, adding, “That’s the first time I’ve ever seen one and it was so close! I should have taken more pictures, but I was worried about the little Downy Woodpecker. It was kind of exciting but kind of sad. We are going to be keeping an eye out because there’s another Downy in the area.”

Individuals interested in knowing more about our area birds are invited to join the Sioux Lookout Birdwatchers Facebook group, located at https://bit.ly/3FNjnol. 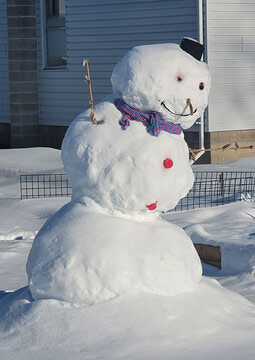