Work is underway on the 8th Avenue Road Reconstruction project in Sioux Lookout.

Taking place on Eighth Avenue from Front Street to Prince Street, work will be ongoing until approximately the end of September.

Asked about the scope of the project, the Municipality shared, “The project is essentially replacing all existing surface works on Eighth Avenue from Front Street through to Prince Street (approx. 350 linear metres) which includes the construction of new stormwater management infrastructure to eliminate the existing ditches/swales, new concrete curb & gutters, new sidewalk and new asphalt surfacing. In addition to the surface works construction, the installation of additional watermains under Eighth Avenue for the provision of increased fire flows to areas west of Eighth Avenue will also be a component of the project.”

Asked about going forward with this project, as opposed work on other roads in town, the Municipality explained that, “With this section of the Avenue having  inadequate drainage infrastructure for many  years, the existing avenue surface is in very poor condition and therefore the reconstruction of the Avenue should  be well received by both local residents and the general public as Eighth Avenue is frequently utilized for access to an elementary school, local cemeteries and recreation facilities (Cedar Bay Recreation Complex and West Point Cove Boat Launch).”

The project is mainly being funded by the Municipality with utilization of some government funding.

“The Municipality appreciates that there may be some inconvenience experienced by travelling public because of the improvements to Eighth Avenue, and thanks the public for its understanding during this important infrastructure upgrade project,” the Municipality concluded. 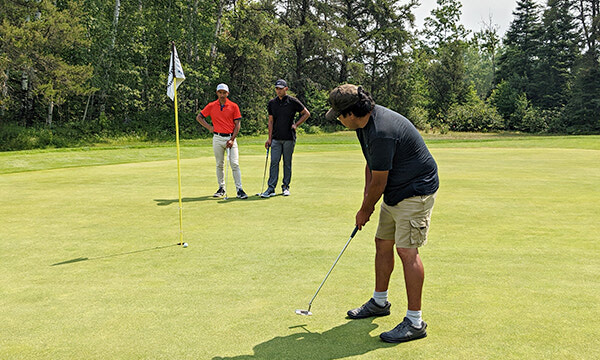 The Sioux Lookout Golf and Curling Club (SLGCC) conducted their Iron Man event on July 10, one of its long-standing golfing tournaments that ran at full capacity this year with the participation of 28 teams...