Adults aged 55 or older from Sioux Lookout, Lac Seul First Nation, Dryden, Barrie, and even as far away as Hawaii took part in the 55+ games held during Sioux Lookout’s 37th Annual Blueberry Festival.
Several events made up the games, which were held to encourage older adults to be active and to generate interest to take part in the provincial 55 + games.
Wally Glena, who coordinated the 55+ games held during the Blueberry Festival, shared, “In Ontario they have what they call the 55+ games. They are held in regions first. Our region is Region 1A, which is Thunder Bay to the Manitoba border, all the communities. This is sort of a prelude to next year. In June, the Dryden seniors are going to host the (reginal qualifier for the) 55+ games, which will include people from all the communities in our area. We thought, as our seniors’ club here, we thought that it would be an ideal time to get things moving in that direction.”
Glena said participants enjoyed themselves, “Comments made from people who participated at the end of their events all suggest it was excellent… We had as large a crowds as we expected and even then some more. We were very happy how everything turned out.”
Glena thanked Blueberry Festival coordinators Hannah Willms, Maddie Mesich, and Blueberry Festival Mascot Blueberry Bert for coming out to the 55+ events, where Bert presented participants with gold, silver, and bronze medals.
Glena also thanked Charron Sippola, Nelson and Brenda Agustin, Lisa Larsh, Barb Roche, and Debra Glena for helping him with this year’s events. He also thanked participants for taking part.
This year’s winners were: singles cribbage: Suzanne Rankin - gold, John Manno - silver, and Duncan Begg – bronze.
Doubles cribbage: Ronald Trout and Valerie Le Cappellain - gold, Duncan Begg and Beverly Konaby – silver, and Barb Adams and Dale Brezinski – bronze.
1.6 Kilometre Predicted Walk: Lee Martin – gold, Lisa Larsh – silver, and Joyce Timpson – bronze. Participants gave their best guess as to how long they thought it would take them to complete the course, with event winners turning in the closest times to their predictions.
Seniors pickleball tournament winners were: James Mansfield and Lisa Larsh – gold, John and Suzanne Rankin – silver, and Clayton Bye and Claudette Richard – bronze.
Bocce tournament winners were: Cindy Henrickson, Randy Henrickson, Laurie Jefferson, and Bonnie Jefferson – gold, Elizabeth Sequin, Dick McIntyre, Georgina Cesiumas and Ruth Bellingham – silver, and Deb Durante, Lawrance Durante, Frank Durante, and Bob Durante – bronze.
Glena said the event was so successful, it will be returning next year. 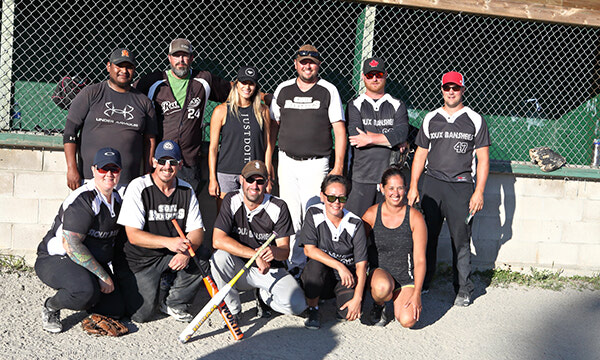 Thirteen teams competed in the 2019 Blueberry Festival Mixed Slo-pitch Tournament which ran from August 9 to 11 at the Sioux Lookout baseball diamonds.