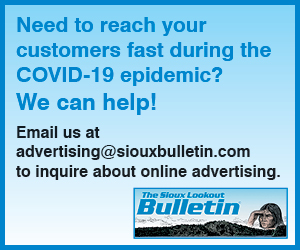 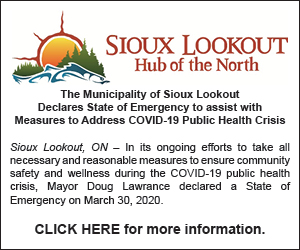 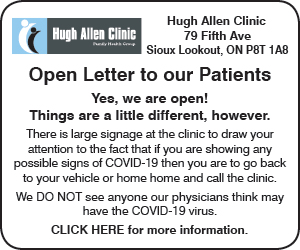 The remains of the victims of the tragic house fire that took place in the early morning of Thursday, May 2nd in Kitchenuhmaykoosib Inninuwug First Nation (Big Trout Lake) have finally returned to their community. A wake was held on Thursday (May 16) in Sioux Lookout at Calvary Baptist Church where many people gathered to mourn the loss of Geraldine Chapman and her four young children. “It is a very difficult time for the community and for all of us who are trying to help,” said Mathew Hoppe, Independent First Nations Association CEO, who attended the wake in Sioux Lookout Thursday. “You can feel the deep sense of shock and loss from the family.”
Following the wake, the remains were sent from Sioux Lookout to Kitchenuhmaykoosib Inninuwug First Nation on Thursday afternoon. Though the last 16 days following the fire have been emotional for the families and for the community, they could not have prepared for the grief they would feel upon receiving the caskets. “This has been the saddest and most difficult day since the fire,” commented Chief Donny Morris. “Watching them bring in the five caskets one after the other was incredibly painful. You can see and hear the heartbreak of the families.”
The planning and coordination of the funeral service was a genuine community effort. Preparations happened in the community hall which remained open throughout the night before the funeral for coordination purposes and community support. The community worked around the clock to prepare for the arrival of mourners from neighbouring communities and others wishing to pay their respects. Groups of people arrived sporadically over the last couple of days, but a large amount arrived Friday morning on charter flights. “Since the fire, we have been working almost 24 hours a day handling the aftermath of the tragedy, providing support to the community, working with the investigative team and making funeral arrangements,” said Chief Donny Morris this morning. “The last few days before the funeral we were particularly busy ensuring that everyone who arrived had food and a place to stay.”
Knowing that the church would not be large enough to accommodate so many people, the community prepared the local hockey arena for the funeral. “The arena was converted into a beautiful church for the service,” said Samuel McKay, Crisis Communications Liaison. “It was so beautiful; I wish that this could have happened for another reason.” “I am truly amazed by how many people came together to help in our time of need,” commented Chief Morris on Friday’s preparations. “We are particularly grateful to many of the youth in the community who stepped up and took part in the coordination of service, despite the fact they are grieving the loss of their schoolmates as well.”
There was an estimated 300 people in attendance for the funeral service, which lasted over three hours. Amidst the palpable grief in the arena, people expressed gratitude for the service. “We are glad that this did not have to be prolonged anymore,” commented Samuel McKay. “As painful as the funeral was, we were thankful to have this opportunity to say goodbye and to give the families a chance to begin to heal.”
Despite the many questions the community has been receiving, they are focusing on the funeral, their grief and on supporting one another. “The community will be looking deeply at the situation and will review in detail the circumstances under which the fire occurred,” Chief Donny Morris shared after the funeral service. “We will be looking at ways to prevent this kind of tragedy from ever happening again. But that conversation will be saved for another day.”
“It has been a long, hard journey for the families and for our community,” said Chief Morris. “We are thankful for the beautiful service and we are relieved that the family is finally home.”
A GoFundMe page is still available for those who wish to support the families and the community:  https://www.gofundme.com/tragic-fire-in-ki.

Question of the week: How are you preparing for summer?