The Ed Ariano By-Pass was reopened last week to commercial vehicles allowing Wellington Street to reopen to traffic.
The by-pass had been closed by the Ministry of Transportation (MTO) due to water over the road as well as a hole being discovered in the road.
MTO shared with The Bulletin last week, “The Ministry of Transportation (MTO) has been working with the Municipality of Sioux Lookout regarding the highway closure, as well as the sinkhole that was discovered on May 24, 2022. MTO staff completed a temporary repair to the sinkhole earlier this week that allows for the bypass to reopen to large commercial vehicle traffic only with traffic control daily monitoring for any change in road conditions. Reopening for passenger vehicles is dependent on water levels receding.”
A detour around Wellington Street between Fourth and Fifth Avenue had been put in place on the morning of May 25 by the Municipality of Sioux Lookout.
The detour had been necessary to facilitate the repair of a sanitary sewermain and repair the roadbed, which had deteriorated due to the excess amount of water in the ground from the flood.
The Municipality had shared that it could not risk reopening Wellington Street until the province reopened the Ed Ariano By-Pass, which would significantly reduce the number of large/heavy vehicles coming through the Wellington Street corridor.
The Municipality advised on social media that, “If the MTO closes the by-pass again, detours will be put back in place.”
The Municipality also shared, “Please drive with care in these areas and watch for changing road conditions.” 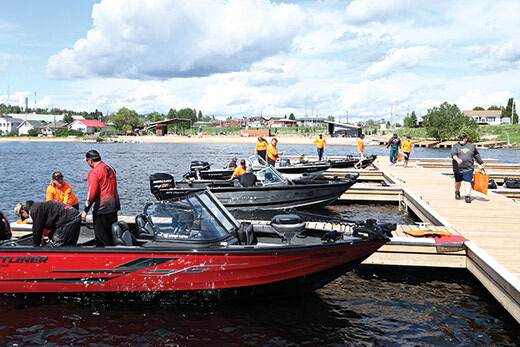