Sioux Lookout loves curling. That seems to be the message that comes through when discussing this year’s curling season with Austen Hoey, General Manager of the Sioux Lookout Golf and Curling Club (SLGCC). Despite restrictions due to the COVID-19 pandemic, Hoey said they have approximately 100 individuals registered on teams in their curling leagues, explaining, “Sioux Lookout has a very solid curling base. We have four ongoing leagues throughout the year. We have our doubles, who play on Monday, our men’s night on Tuesday, we have our Ladies night on Wednesday, and then we have our mixed night on Friday. And all of the leagues are pretty solid in terms of representation and competitive level. It’s overall a really solid community here in Sioux Lookout. I’ve heard that it is tough for other communities to maintain a strong curling population.”

Part of what has allowed curling to remain as popular as it is locally has comes down to the facility itself, says Hoey. “We are pretty blessed to have such a large facility. Obviously with the complete shutdown in January we were left out to dry a little bit in terms of not actually being able to have anyone in the club, due to restrictions, but once things were opened up, our building was large enough that we were able to accommodate all of our curlers safely and comfortably.”

Hoey credits part of the appeal of the sport locally to the family friendly atmosphere, stating, “All in all it’s been a pretty fun year for curling. I’ve been somebody who has watched it on TV, but I really haven’t played it or been involved in it. This year, getting to know the icing process and helping out with that, and organizing tournaments, plus actually joining in some of the leagues, it’s been very cool. I’ve really gained a lot of respect and enjoyment for the sport of curling. It’s been a lot of fun; all the members have been very welcoming.”

Hoey encourages potential new curlers to come out and see if it’s something they might enjoy, adding, “One thing you’d learn if you did decide to come out is that we have curling every night of the week at the club, and people are welcome to come down any night of the week to watch and learn and maybe even join a team. Honestly, it’s been a like a family here, and it’s been really good.”

The club has hosted three bonspiels this winter, the Skip to Equip Classic was held Nov.8-10, the Knobby’s Memorial Funspiel on Dec. 28, and a regular Mixed Bonspiel which took place on Feb. 19. The last bonspiel of the season, Hoey added, is quickly approaching. He shared, “March 12 will be our Glow Curling Night… It will be our last bonspiel of the season.  We are pretty excited about that, it’s always a good time, we’ll have another trivia night for the end of March. Then curling wraps up around the first week of April.”

More information on upcoming events at the SLGCC can be found on the club’s Facebook page or by calling the Club at 737-1800. 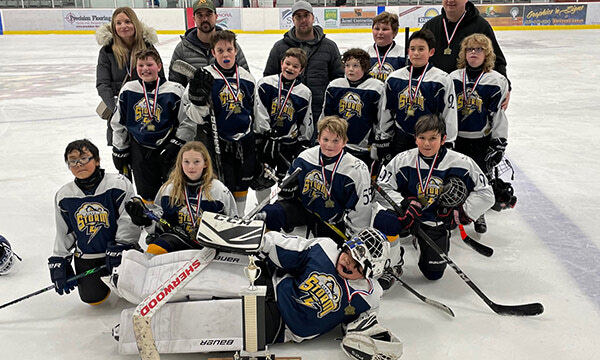 Busy weekends for both the Sioux Lookout Minor Hockey Under 11 (U11) and Under 7 (U7) teams in February....