Bergen, with his 8-dog team, participated in the Gunflint Mail Run, which is a 65-mile race in Cook County, Minnesota on Jan. 5 and 6.

Bergen finished the race in just over six hours (6:10:55; 5), which earned him fourth place among the 8-dog teams.

“It was good seeing old friends and all that sort of stuff. It was a lot of fun. There were good temperatures. It wasn’t super cold but there was slush on the lake,” said Bergen.

“Last year I got sixth place out of 15 teams and this year I got fourth, so I was fairly happy with that,” he continued.

At the end of the month Bergen will be participating in the John Beargrease Sled Dog Marathon Race, which takes place in Duluth, Minnesota. The race hosts more than 60 world class mushers and is run by over 500 volunteers from across North America. The race will be on Jan. 27 and 28. Bergen said this race his favourite.

“It’s kind of my favourite race. It’s the longest one I do at 120 miles. The Mail Run is 70 miles, so this one’s a bit longer and there are usually more competitors. Last year I think there were around 35 teams. The Beargrease is a well-known race that a lot of people come to,” he said.

Bergen began working with sled dogs in 1990. Then, in the late 90s and heading into the 2000s, Bergen began racing in 12, 25, and 30 mile races. His three kids experienced working and racing with the dogs and his daughter, Leanne, began competing with him locally and internationally.

Bergen shared that, this year, his daughter decided to take a break from racing.

“She took the winter off. There’s so much effort behind training dogs and all that sort of stuff. I stick to the 120 mile races, but Leanne has been doing 240 mile races with the 12 dogs…She would accumulate, by the end of the season on her main team, 2000 miles on her dogs. She’s burnt out and needed a winter off,” he explained.

Following the John Beargrease Sled Dog Marathon Race, Bergen will be participating in the Midnight Run race in Marquette, Michigan Feb. 15, 16, and 17. He said it’s a unique experience different from the other races he participates in.

“The Midnight Run, which is in Marquette, Michigan, and that one’s a 90-miler. It’s a lot of fun. The city hauls in snow, and packs around six inches of it onto their main streets and that’s where we take off from. There are at least 3000 to 6000 people who line the streets while you take off…It’s probably the funnest take off we have,” he said.

“It’s called a Midnight Run because you take off at night, so you take off for 45 miles into the dark at seven o’clock at night. There’s a mandatory rest and then you turn around and come back another 45 miles and finish at around noon the next day back in the city of Marquette. It’s fun running your dogs down the streets,” he concluded. 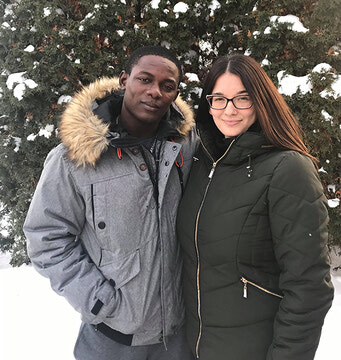 Sioux Lookout resident Krista Williams received the best possible gift over the holiday season - being reunited with her husband Ronique Williams, who is from Montego Bay, Jamaica.