Blueberry Festival slo-pitch tournament attracts players from across the region

Twelve teams took part in 3D’s 2nd Annual Baseball Tournament, held July 30 and 31 at the ball diamonds during this year’s Blueberry Festival.
In the A-Side Final, Gym Class Heroes beat Murphy’s Law.
Just Ok defeated the Gull Bay Warriors in the B-Side Final.
In the C-Side Final, Mishkeegogamang beat the RBIs.
Gym Class Heroes captain, Kevin Savoury, said although his team, made up of Sioux Lookout residents, is a regular in the tournament this was their first year making it into and winning the A-Side Final.
He said it was a fantastic tournament, adding, “We’re just happy to be out here with all our friends.”
The A-Side runner up team, Murphy’s Law, was made up of players from across the region. Team Captain, Stuart Bouchard, said it was a good tournament. “Overall, we enjoyed it,” he added.
Just Ok’s captain, Adam Kelly, said it was a good slo-pitch tournament, adding his team, made up of Sioux Lookout residents, had fun. “It was fun. Good teams, good competition,” he said.
The Gull Bay Warriors are regulars in the tournament. Conway Bouchard, captain of the B-Side runner up team, said he and his teammates from Gull Bay had a good time taking part in the tournament.
Event Coordinator Caroline Ignace-Spade said it was a competitive tournament, which she felt ran well.
The late Cristal Spade, as well as the late Jason Tait, were honoured at the event through trophies presented in their honour to youth taking part in the tournament. Emma Bighead was presented with the Female MVP award, while Cole Elliot was named the Male MVP. 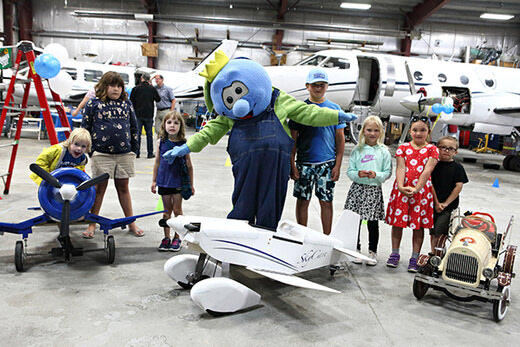 SkyCare's hanger was a hub of activity on August 3 during this year's Blueberry Festival....