More than 130 people packed the Edwin Switzer Memorial, Royal Canadian Legion, Branch # 78 last Saturday for a Remembrance Day Tea.
Organized by the Legion Ladies Auxiliary, the afternoon tea was a fundraiser for the Legion.
This year’s tea held extra significance for the Legion Ladies, as they are celebrating their 70th anniversary this year.
Legion Ladies Auxiliary president Charron Sippola said she was happy to see so many people attend the event, “I think the community does a good job of supporting the Legion,” Sippola added.
Legion Ladies Auxiliary member Sandra Lockhart echoed that statement commenting, “We want to keep the Legion in the hearts of everyone in town.”
Members of 270 Otter Cadet Squadron served tea, coffee, sandwiches and dainties during the event.
The event included a bake table and a touch and take table.
Sippola said it was wonderful having the assistance of the cadets, for which she thanked them.
Centrepieces quilted and crafted by Sippola, along with a large balloon 70 swaying above the serving table were added touches to this year’s Remembrance Day Tea, which has been held annually since 1953.
Remembrance Day services will take place in Sioux Lookout and Hudson on November 11.
Community members in Sioux Lookout are asked to gather outside of the Legion at 10:40 a.m.
Community members in Hudson are asked to meet outside of the community hall at 10:40 a.m.
A luncheon will follow both services. 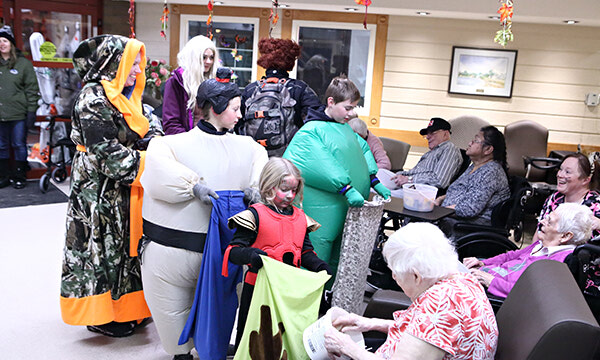 Residents at the William A George Extended Care Unit handed out candy to the many children who visited them on Halloween evening, putting a smile on the faces of residents and visitors alike.