Bearskin Lake First Nation Chief Rodney McKay has declared a State of Emergency as rapidly rising flood waters threatens the community.
Nishnawbe Aski Nation (NAN) Grand Chief Alvin Fiddler issued the following statement on Nov. 10, “Water is rising quickly from a severe ice jam and several roads are now submerged across the community. Community members are cut off from the airport and vital infrastructure including the water treatment plant has been compromised. Without immediate action the ice jam will keep building and the water will keep rising. We are in constant communication with the community and provincial and federal ministries and have requested that a coordinated response be mobilized to attempt to clear the ice jam and prepare for a possible evacuation.”
A news release issued by NAN informed, “Water is backing up from an ice jam at the White Sand Rapids along the Severn River, just downstream from the community. Plans are being developed to blast the ice jam with explosives. A precautionary evacuation plan is also being developed that will use helicopters to transport isolated community members.
“Bearskin Lake First Nation is a remote community on Michikan Lake located approximately 450 kilometres north of Sioux Lookout, accessible only by air and a seasonal winter road. The OjiCree community has a membership of approximately 1,000, with an on-reserve population of approximately 500.” 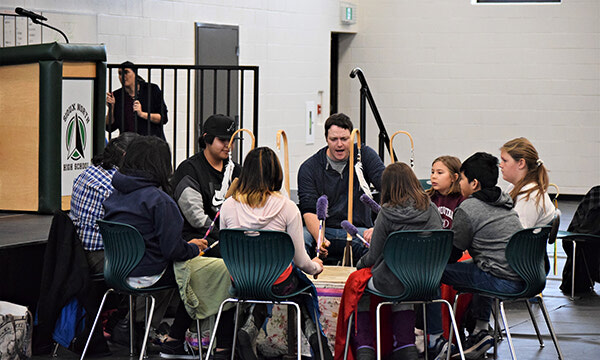 Sioux North High School (SNHS) joined schools across the Keewatin-Patricia District School Board (KPDSB), and Ontario, by participating in Treaties Recognition Week ceremonies, activities, and teachings from Nov. 4 to 8.